Marg arriving at Kalumburu after our chartered three hour flight from Broome. Not quite ‘international’ standard but just what we were hoping for. Fr Nick arrived in his 4WD to welcome us. (I haven’t seen any 2WDs here at all). 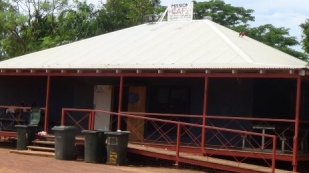 We soon found the Mission Café, a galvanised iron shop where we serve from 6.30am to 4.00 pm, with a two hour break lunch break (when we sleep). The ‘locals’ (i.e. aborigines) buy groceries and take- away food as many of them don’t/can’t cook in their houses.

Our ‘donga’ is an old 3BR corrugated iron house with plenty of creepy crawlies. It has air conditioners in the bed rooms but we find we don’t often need them. The toilet and laundry are ‘out the back’. We are advised to always use a torch at night in case of snakes, but we haven’t seen any yet. The trees around are mango and frangipani.

The ten volunteers who are here at the moment eat dinner together under the verandah behind the monastery each evening after Mass. Most volunteers eat the other meals in their own ‘dongas’ as their work schedules are all different. Brenda, who does the cooking, produces great meals from left over ingredients so no one goes hungry. Six of the present volunteers will be gone by March.

The church of Our Lady of the Assumption was rebuilt after WW11 from bush poles and corrugated iron after being destroyed by Japanese bombs. Although almost all of the locals are Catholic, very few come to the church at all. Fr Nick expresses real frustration at their lack of interest despite all his efforts to involve them.

The old monastery was built in 1937 and is still the operating centre for the Mission. The monks ran the Mission until mid seventies when the government set up an ‘independent’ aboriginal corporation. Since then all the farms and industries have disappeared and the Kalumburu community is now totally welfare dependent. The Catholic bit is now totally separate but adjoins the aboriginal community. 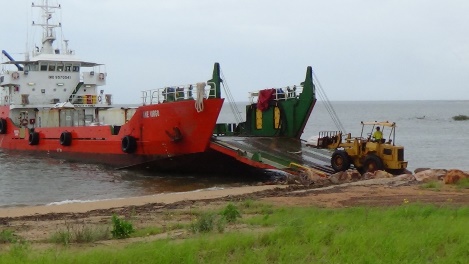 All supplies and equipment are brought to the Mission by the ‘barge’ every fortnight. The ‘landing’ is a boat ramp on the beach which has enough depth for one hour each side of high tide. Tide rises and falls over six meters here. A tractor carries supplies to trucks waiting at the top of the ramp which then drive the 20 km back to the Mission for unloading by forklift and stowing into cool rooms by chain gang.